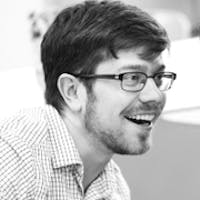 AJ Christensen is a visualization programmer in the Advanced Visualization Lab (AVL) at the National Center for Supercomputing Applications (NCSA). He is a hybrid programmer and visual designer with a background in computer science, animation, and science communication. As part of the AVL, he focuses on scene design of the team’s cinematic visualizations of supercomputer data using Hollywood visual effects tools like Maya and Houdini. This often involves manipulating and formatting scientific data externally and deriving new data using techniques like particle advection and volume analysis. He develops computer graphics algorithms and shaders to highlight important features in scientific datasets, to optimize design speed and workflow, and to refine organic immersive environments. AJ has contributed to the IMAX films "Hubble 3D" and "A Beautiful Planet", as well as digital fulldome shows like "Dynamic Earth" and "Solar Superstorms". In addition to his film credits with the AVL, he contributed to the science-inspired renderings of a black hole in the Christopher Nolan film "Interstellar" with effects studio Double Negative.