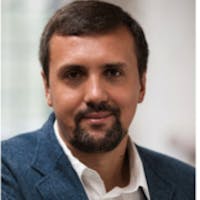 Andrey is a lifelong technology executive with deep expertise in delivering innovations in both governmental and commercial sectors. Since 2018, he works as Advisor to Head of the Analytical Center for the Government of the Russian Federation where he provides strategy and analytical support to national projects on Digital economy. Before this role Andrey was responsible for developing and implementing smart solutions in Moscow as a Deputy Minister of IT in Moscow Government. Public city Wi-Fi, citizen engagement platform, system of online public services, and mobile apps for the Moscow residents are only a few among successful projects implemented in Moscow under his guidance. He was also in charge of Electronic Government initiative of the Russian Government. Andrey is a frequent speaker at international conferences and forums, such as Smart City Expo World Congress (Barcelona), Arab Future Cities Summit (Dubai), ICF Summit (New-York), CeBIT Global Conference (Hannover), Mobile World Congress (Barcelona). In 2017 Andrey moderated Russia Singapore Business Forum at Open Innovations Forum (Moscow).

Digital transformation of megapolises: from zero to #1 in UN digital e-government ranking