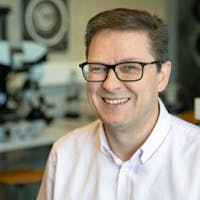 Christophe Champod received his M.Sc. and Ph.D. (summa cum laude) both in Forensic Science, from the University of Lausanne, in 1990 and 1995 respectively. Remained in academia until holding the position of assistant professor in forensic science. From 1999 to 2003, he led the Interpretation Research Group of the Forensic Science Service (UK), before taking a full professorship position at the School of Criminal Justice (ESC) of the University of Lausanne. He is in charge of education and research on identification methods and maintains an activity as an expert witness in these areas. He is also operational manager of the ISO/SEC 17025 accredited forensic laboratory of the ESC. He is a Steering Committee member for the International Fingerprint Research Group (IFRG), past member of SWGFAST (Scientific Working Group on Friction Analysis, Study and Technology) and, since 2014, an invited member of Friction Ridge subcommittee (part of the Physics and Pattern Evidence Scientific Area Committee) of the Organization for Scientific Area Committees (OSAC). In 2015, he received the Distinguished ENFSI (European Network of Forensic science) Scientist Award for his contribution to forensic science. His research is devoted to the inferential aspects associated with forensic identification techniques. The value to be attached to forensic evidence is at the core of his interests.

Challenging Forensic Science: How Science Should Speak to Court