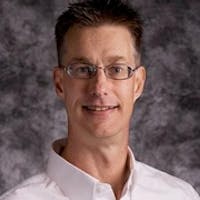 I joined the Department of Electrical, Computer, and Energy Engineering at the University of Colorado Boulder in the Fall of 2016 as an Adjunct Professor teaching undergraduate courses in logic design. In the Spring of 2017 I joined the graduate school and the Embedded Systems Engineering Program to create and teach a new course: Developing the Industrial Internet of Things. I earned my B.S. in Electrical and Computer Engineering at Michigan Technological University. I joined Sperry Univac designing a cache controller and then the floating point unit for the 2200 series mainframes. I then joined a small graphics company where I designed 3D graphics chips for PCs. In 1995 I moved to Colorado to open the first LSI Logic office in the state. My role was North American Field Coreware Manager leading a small team of engineers embedding MIPS microprocessors into many dozens of chips. Later I moved from management back into engineering in LSI's Consumer group where I functioned as lead hardware architect for satellite set-top box decoders. With Colorado being somewhat of a storage mecca, I joined Seagate in 2006 and developed the logic for Seagate's first self encrypting hard drives. I then moved on to become lead hardware architect for solid state enterprise drives. My most recent corporate role was Senior Systems Engineer at SEAKR Engineering where I assisted in the development of a significantly large and complex chip for satellite communications. More info can be found on LinkedIn. On the technical front, my areas of expertise include physical layout of standard cell designs, Verilog and SystemVerilog for design, logic synthesis, static timing analysis, power analysis, test insertion and automatic test pattern generation, and constrained random verification. Additional expertise includes the storage protocols SATA, SAS and PCIe/NVMe.