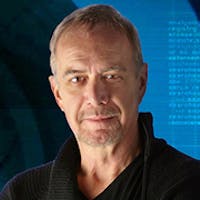 David is the Director of Media Sandbox at Michigan State University. After graduating with Honors from The London Film School in the UK, he was brought to Los Angeles by CBS where he worked in Broadcast Journalism, Film, Television and TV Commercials as a writer, director and cinematographer. He directed his first video game, the 11th Hour in 1995 and has since made many video games and interactive movies including the ground breaking Tender Loving Care with the great British actor John Hurt. David was the Content Director for game publisher Vivendi/Universal and Senior Creative Director at Electronic Arts. He has founded/co-founded Terra Nova Productions in Hollywood, Aftermath Media in Ashland, Oregon and Digital Circus in Vancouver, Canada. In 2012 he formed his 4th media company, Here And Now Transmedia, in Los Angeles. David came to Michigan State University to head up Media Sandbox in November, 2013.

Write A Feature Length Screenplay For Film Or Television

The Search for Great Ideas: Harnessing creativity to empower innovation.

Planning: Principled, Proposing, Proofing, and Practicing to a Success Plan