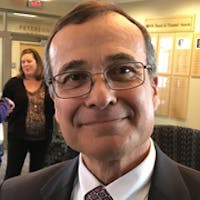 Len Polizzotto is widely recognized for his uniquely successful business development abilities. A centerpiece has been the study, application, and teaching of innovation best practices, where he has made many contributions, including the “Three Cs” for helping identify new business opportunities and “Value Factor Analysis” for maximizing the value of new products. Previously, he was Draper Laboratory’s Vice President responsible for new programs, leveraging Draper’s technologies for new applications. He established Draper’s Bioengineering Center on the USF campus in Tampa, a multi-chip module facility in St. Petersburg, Draper’s energy business, and led two medical consortia. One, IMEDS, focused on systems integration to provide real-time decision support to clinicians at ICU bedsides. Prior to joining Draper in 2007, Polizzotto was Corporate Vice President for Business Development at SRI International, where he established a proteomic drug development center in Harrisonburg, Virginia and a center for oceanographic research in St. Petersburg, Florida. He helped develop and teach innovation workshops to company executives throughout the world. Previously he was Corporate Vice President for new business development at the Polaroid Corporation, responsible for developing several new consumer and industrial products. Between corporate positions, Polizzotto directed the Center for the Globalization of Technology and taught courses in electrical engineering and design at Worcester Polytechnic Institute. In the past eight years, he founded one and led another high-tech start-up, both in the biomedical area. He is a Charter Fellow in the National Academy of Inventors. He received his Ph.D. in visual sciences, combining electrical engineering, perceptual psychology, and ophthalmology, from Tufts University. He earned M.S. and B.S. degrees in electrical engineering from Worcester Polytechnic Institute, where he was an NCAA Post Graduate Scholar, and president of both Tau Beta Pi and Eta Kappa Nu. Additionally, he completed The Executive Program at the University of Virginia’s Darden Graduate School of Business. He holds twelve patents and is the author of articles on human color perception, digital imaging, microphotography, and innovation. He has also published two books on drum set playing instruction.