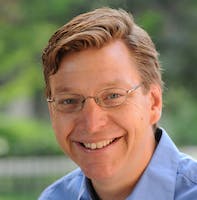 Mike Brown is the Richard and Barbara Rosenberg Professor of Planetary Astronomy at the California Institute of Technology and has been on the faculty there since 1996. Among his accomplishments, he is best known for his discovery of Eris, the largest object found in the solar system in 150 years, and the object which led to the debate and eventual demotion of Pluto from a real planet to a dwarf planet. In 2006 he was named one of Time magazine's 100 Most Influential People. At Caltech he teaches undergraduate and graduate students, in classes ranging from introductory geology to the formation and evolution of the solar system and has been awarded the Richard P. Feynman Prize, the highest teaching award at Caltech. He was also named one of Wired Online's Top Ten Sexiest Geeks in 2006, the mention of which never ceases to make his wife laugh.

The Science of the Solar System