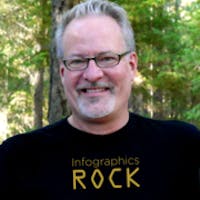 Karl Gude teaches classes in print and motion information graphics (infographics) as well as creative thinking and problem solving in the School of Journalism at Michigan State University's College of Communication Arts and Sciences. Prior to coming to academia in 2006, Karl worked as the Director of Information Graphics for Newsweek magazine and for The Associated Press. Karl visually told stories on every topic imaginable during his 25 years working in the news industry, from presidential elections to sporting events and from technical, medical and scientific discoveries to terrorist attacks. Karl led Newsweek’s graphics team during the attack on the World Trade Center and many other breaking news events. Since coming to academia, Karl has pointed his visual storytelling lens beyond journalism. He is working on a National Science Foundation grant to help people understand evolutionary biology and was invited by scientists at CERN, Switzerland to work with his students to explain the science of the Large Hadron Collider. Karl has consulted numerous times for the CIA as well as health and PR professionals to convey their messages in new ways. He has given three TEDx talks and has spoken twice at South by Southwest (SXSW) in Austin on the power of visual storytelling.