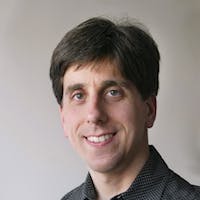 Kevin Wayne is the Phillip Y. Goldman Senior Lecturer in Computer Science at Princeton University, where he has been teaching since 1998. He received a Ph.D. in operations research and industrial engineering from Cornell University. His research interests include the design, analysis, and implementation of algorithms, especially for graphs and discrete optimization. With Robert Sedgewick, he is the coauthor of two highly acclaimed textbooks, Computer Science: An Interdisciplinary Approach (Addison-Wesley, 2016) and Algorithms, 4th Edition (Addison-Wesley Professional 2011). Together, Sedgewick and Wayne co-developed two of the most popular courses at Princeton University and four associated MOOCs on Coursera, inspiring thousands of students locally and hundreds of thousands more worldwide. He has won numerous awards for his teaching was named an ACM Distinguished Educator in 2014.

Computer Science: Programming with a Purpose