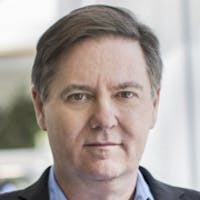 Campbell R. Harvey is Professor of Finance at the Fuqua School of Business, Duke University and a Research Associate of the National Bureau of Economic Research in Cambridge, Massachusetts. He served as President of the American Finance Association in 2016. Professor Harvey obtained his doctorate at the University of Chicago in business finance. He has served on the faculties of the Stockholm School of Economics, the Helsinki School of Economics, and the Booth School of Business at the University of Chicago. He has also been a visiting scholar at the Board of Governors of the Federal Reserve System. He was awarded an honorary doctorate from Svenska Handelshögskolan in Helsinki. He is a Fellow of the American Finance Association. Harvey received the 2016 and 2015 Best Paper Awards from The Journal of Portfolio Management for his research on distinguishing luck from skill. He has also received eight Graham and Dodd Awards/Scrolls for excellence in financial writing from the CFA Institute. He has published over 125 scholarly articles on topics spanning investment finance, emerging markets, corporate finance, behavioral finance, financial econometrics and computer science. Harvey is a Founding Director of the Duke-CFO Survey. This widely watched quarterly survey polls over 1,500 CFOs worldwide. Harvey serves Partner and Senior Advisor at Research Affiliates, LLC who oversees over $200 billion in client funds as well as Investment Strategy Advisor to the Man Group plc, the world’s largest, publicly listed, global hedge fund provider. Harvey edited The Journal of Finance – the leading scientific journal in his field and one of the premier journals in the economic profession from 2006-2012. Over the past five years, Professor Harvey has taught “Innovation and Cryptoventures” at Duke University. The course focuses on blockchain technology covering both the mechanics of blockchains as well as practical applications. His publications can be found at http://people.duke.edu/~charvey/research.htm.