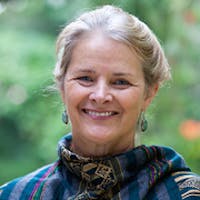 Lynn Sibley is a Professor in the Nell Hodgson Woodruff School of Nursing at Emory University and holds a joint appointment in the Rollins School of Public Health’s Hubert Department of Global Health and an affiliate appointment in the Department of Anthropology. A nurse midwife anthropologist, her career has been devoted to reducing childbirth mortality for women and newborns across the world’s low resource settings by focusing on community-level formative and implementation research and programming. Dr. Sibley led the first field-tests in India and Ethiopia of the Home-Based Lifesaving Skills program that she created in collaboration with colleagues at the American College of Nurse-Midwives. This revolutionary program, now implemented in over a dozen countries, focuses on educating birth attendants, women and family caregivers about basic lifesaving techniques they can use without expensive tools or technology. This work captured the attention of the Bill and Melinda Gates Foundation and, in 2009, Emory received a 3.5-year grant to develop a community-oriented model for maternal and newborn health in two regions of rural Ethiopia and position it for national scale-up. This work, completed in May 2013, focused on the critical birth-to-48 hour period in and around the time of birth when women and newborns are most likely to die. In 2012, Emory received a 4-year grant from the Canadian International Development Agency-funded Micronutrient Project to replicate the model in a third region of the country, incorporating the pregnancy period and maternal nutrition. Dr. Sibley is Principal Investigator of these initiatives and leads multi-disciplinary teams of Ethiopian colleagues. These initiatives operate under the leadership of the Ethiopia Federal Ministry of Health and Regional Health Bureaus, in collaboration with other partners, including Addis Ababa University, to support the Ministry of Health’s flagship Health Extension Program. Dr. Sibley’s work with the Bill and Melinda Gates Foundation-funded project has contributed to Emory establishing a legal presence in Ethiopia and, as such, has reaffirmed Ethiopia as a priority country by the university. As a result Emory’s Global Health Institute is spearheading an effort to support positions at Emory and in Ethiopia and expand Emory’s presence there. Beyond the work in Ethiopia, Dr. Sibley was founder and former director of the Center for Research on Maternal and Newborn Survival, an arm of the Lillian Carter Center for Global Health and Social Responsibility at Emory. Her other professional activities over the years include service as an advisor/consultant on community-level maternal and newborn health to well-respected global organizations including the World Health Organization, UNICEF, International Confederation of Midwives, the United States Agency for International Development, and the National Institutes of Health.