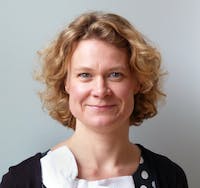 Larissa van den Herik is professor of public international law at Leiden University. She is programme director of the Grotius Centre for International Legal Studies, and programme director of the advanced LL.M. programme on Public International Law, with specializations in Peace, Justice and Development and International Criminal Law. She serves as general editor of the Leiden Journal of International Law (former Editor-in-Chief 2005-2013), and is general annotator for the Dutch general law journal Ars Aequi. She also holds the position of vice-chair of the Advisory Committee on Public International Law Issues to the Netherlands Government and has advised the government in that capacity, inter alia, on drones and cyber warfare. Her areas of research and expertise include international peace and security law with a focus on UN sanctions (see e.g. contribution to legal parts of the Watson reports on sanctions and due process of 2006, 2009, and 2012) and terrorism, international criminal law and particularly the law on genocide and crimes against humanity, the role of domestic courts and questions of corporate responsibility and natural resources. Her current research focuses on fact-finding in international law, specifically in conflict situations, and the role of commissions of inquiry.