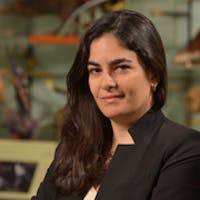 Dr. Ana Luz Porzecanski is a conservation scientist and director of the American Museum of Natural History’s Center for Biodiversity and Conservation (CBC), a research center focused on transforming knowledge—from diverse sources and perspectives, and spanning areas of scientific research as well as traditional and local knowledge—into conservation action. Growing up in rural Brazil, Ana was surrounded by wildlife and diverse landscapes. Both her parents are professors—her father an agronomist and her mother an architect and amateur paleontologist—and they traveled widely, instilling in Ana an early curiosity about the natural world. One of her favorite things about science, she says, is that “you’re surrounded by people who love questions as much as answers.” She obtained her undergraduate degree in biological sciences from the Universidad de la República, Uruguay, and there she got her first taste of field research. She took an evolution course that involved field work on a fascinating burrowing mammal called a tuco-tuco which is unique in its social behavior. Despite the rustic and cold conditions, she was hooked. For her Ph.D. in Ecology and Evolutionary Biology at Columbia University, she conducted research on the systematics and historical biogeography of South American aridland birds, as well as on international environmental policy issues. Her dual interest in education and research has carried out over 15 years of experience coordinating and leading conservation capacity development projects, designing teaching materials for university professors and conservation professionals, and leading professional development for educator audiences in Latin America, Africa and the United States. Ana has also taught courses in conservation biology and evolution at Columbia University and New York University. She became director of the CBC in 2014. Ana was drawn to biodiversity conservation because it applies a range of scientific fields—from ecology, biogeography, population genetics, anthropology, and others—to tackling real world conservation problems, and involves ongoing collaboration and dialogue. She and her CBC colleagues have found that success comes when researchers are collaborating with local communities, and developing their capacity together. For example, Ana led a recent partnership with the National Museum of Natural History of Cuba, which resulted in a ground-breaking, joint expedition to Humboldt National Park in 2015. The expedition produced the first modern collection of specimens of invertebrates (snails, insects, and arachnids), amphibians, reptiles, birds, and mammals, including tissues and blood parasites, from Humboldt National Park, to be shared between both countries. Exchanges on field methods, and training on research and education, helped strengthen capacity for science and conservation on all sides. Similar projects have involved working with local educators and conservation managers in Peru, Bolivia, Madagascar, and Mongolia. Ana recently gave a presentation at a conference called STEMism: Inspiring Women Scientists. She told an audience of women and girls that despite the discrimination and biases that persist in the field and make the news, careers in science can be successful and enjoyable. She related her journey to find a career that is both challenging and fulfilling: “You have to listen to yourself as you go through life and see where are you humming. Pay attention to when are you buzzing when you’re working, when are you happiest, what are you really good at. And follow that.”