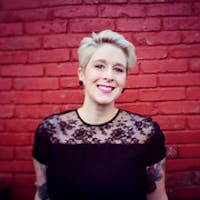 Chrissy Tignor is a producer, songwriter, recording engineer and vocalist with a super-synthy pop style fused with EDM and hip hop influences. She is full-time faculty in the Contemporary Writing and Production Department at The Berklee College of Music in Boston, MA USA. Chrissy got her start in 2004, studying Music Production and Technology at The Hartt School of Music in Hartford, CT in The United States. She specialised in engineering and production techniques, classical vocals and composition and became recognized for her intricate instrumental arrangements and dreamy style in recorded music. In 2008, Chrissy travelled to England to enroll in the MA Audio Production course at The University of Westminster in London. It was there that she began to experiment with drum programming and synthesis. She developed a love for the UK music scene whilst studying, and decided to remain in London upon graduation. Fairly new to the scene, she was immediately noticed for her unique production, programming and songwriting style by several studios, musicians and production houses. She is currently living and working in Boston. Chrissy has engineered in such studios as Tin Pan Alley Studio, The Canvas Room, Jamspot Studios, Sanctum Sound and Eastcote Studios and has worked with production companies and artists such as Alex Clare, Gary Go, Good Old War, Bastille, Lauren Hashian, Choppa Dunks, Novena, Notting Hill Music, Rollover Music, Alive Production, Camille Purcell, Andrea Britton, Gary Bromham, Derek Capobianco, Indigo Earth and The Franks. She has been mentored by the likes of Mike Exarchos, Phil Thornalley, Gabe Herman, Ken Steen and Kevin Paul. She also shared her knowledge at such educational institutions as The Uppingham School, King's College School, The University of Westminster, Recording Connection and WAC Wonder Web.