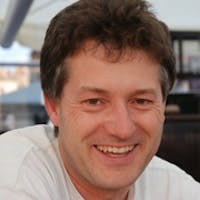 Professor Keith Martin B.Sc. (Glasgow), PhD (London), CMath FIMA is Professor of Information Security. He received his BSc (Hons) in Mathematics from the University of Glasgow in 1988 and a PhD from Royal Holloway in 1991. Between 1992 and 1996 he held a Research Fellowship at the University of Adelaide, investigating mathematical modelling of cryptographic key distribution problems. In 1996 he joined the COSIC research group of the Katholieke Universiteit Leuven in Belgium, working on security for third generation mobile communications. Keith rejoined Royal Holloway in January 2000, became a Professor in Information Security in 2007 and was Director of the Information Security Group between 2010 and 2015. Keith's current research interests include key management, cryptographic applications and geopolitical aspects of cyber security. He is the author “Everyday Cryptography” by Oxford University Press. As well as conventional teaching, Keith is a designer and module leader on Royal Holloway’s distance learning MSc Information Security programme, and regularly presents to industrial audiences and schools.