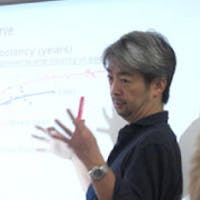 Dr. Shibuya is Professor and Chair of Global Health Policy at the University of Tokyo’s Graduate School of Medicine and President of the Japan Institute for Global Health. He obtained his MD at the University of Tokyo and his doctorate in international health economics at Harvard University. After teaching at Teikyo University in Tokyo, he joined the WHO’s Global Programme on Evidence for Health Policy in 2001 and was chief of the Health Statistics and Evidence Unit from 2005 until 2008. He has published widely on mortality, causes of death, burden of disease, risk factors, cost-effectiveness, priority setting, health system performance assessment and health diplomacy. He spearheaded the future strategic directions of the Japanese global health policy agenda after the Hokkaido Toyako G8 Summit in 2008. He led the Lancet Series on Japan, published in 2011 in an effort to jump-start debates on Japanese domestic and global health policy reform. He is currently an advisor to both central and local governments. This year he chaired the landmark Advisory Panel on Health Care 2035 for the Minister of Health, Labour and Welfare. He is currently the Executive Advisor on Global Health for the Ministry of Health, Labour and Welfare.