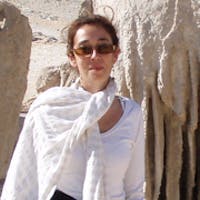 Since 1 February 2017, Paola Buzi is Full Professor of Egyptology and Coptic Studies. She graduated from La Sapienza University in 1995 with a thesis on Coptic Language and Literature. In 2002 she obtained a PhD in Egyptology from the same university, with a dissertation entitled “Titles and Authors in the Coptic Literature”. She has worked as a fixed term lecturer (“assegnista di ricerca”) in the Department of Archaeology of Bologna for five years and from January 2010 she works on behalf of the Akademie der Wissenschfaten zu Göttingen at Hamburg University cataloguing the Coptic manuscripts preserved in the German collections. From 1 November 2010 to 31 January 2017 she was Assistant Professor of Egyptology and Coptic Studies at Sapienza University. She sits on the Board of the International Association of Coptic Studies (IACS) and is a member of both International Associations of Egyptologists and the Academia Ambrosiana. She combines historical, literary and codicological interests with archaeological activities. She has taken part in several excavation campaigns in Italy and in Egypt. Since 2002 she has been a member of the Archaeological Mission in Bakchias (Fayyum) and co-director of the same mission since 2008. She is also vice-director of the Italo-Egyptian Conservation Mission at the Coptic monastery of Abba Nefer (Manqabad, Asyut). She is scientific collaborator of the Corpus dei Manoscritti Copti Letterati (Rome, Hamburg) and a member of the Italian Institute for Egyptian Culture (IICE). Among her most important scientific collaborations the following should be listed: 1) co-Leader of Team 4 (Cataloguing) in the “Comparative Oriental Manuscripts Studies” (COMSt) project, financed by the European Science Foundation; 2) collaboration with the Akademie der Wissenschaften zu Göttingen for the “Katalogisierung der Orientalischen Handschriften in Deutschland” project; 3) collaboration with the Hiob Ludolf Centre and the Centre for the Study of Manuscript Cultures, Hamburg University. Her publications range from Coptic literature to codicology and from archaeology to the history of Coptic and Egyptological studies.