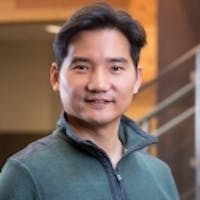 Prof. Seungbum Hong has graduated summa cum laude with a B.S. from Korea Advanced Institute of Science and Technology (KAIST) in 1994 and received his Ph.D. in the field of nanoscale observation of ferroelectric thin films at KAIST in 2000. After a year of post-doc experience in Ecole Polytechnique Federale de Lausanne (EPFL) in Switzerland from 2000 to 2001, he joined the probe storage project team as a project leader at Samsung Advanced Institute of Technology from 2002 to 2007. In 2007, he moved to Argonne National Laboratory as a tenured staff scientist, and worked as a principal investigator in local domain and transport studies of oxide heterostructures and polymer ferroelectrics using atomic force microscopy until 2017. In 2017, Prof. Hong joined KAIST as an associate professor with tenure in the department of materials science and engineering. He has a broad experience to link the fundamental science with industrial applications (120 peer reviewed journal papers (including 4 book chapters), 5 book editions, 4 book chapters, 76 patents) with a profound knowledge in the area of nanoscale characterization of ferroelectric and piezoelectric materials. He has been invited in major conferences or universities, has been awarded the Young Investigator Outstanding Achievement Award from International Symposium on Integrated Ferroelectrics in 2008, elected as the Frontier Scientist by the Korean Academy of Science and Technology in 2014 and has worked as a symposium organizer in MRS Spring 2006 and 2008, MRS Fall 2010, and APS March Meeting 2013. He visited EPFL as an invited professor in 2014, and has been appointed as a senior fellow by Northwestern Argonne Institute of Science and Engineering since 2016. He was the chair of CNM user executive committee in 2015 and worked as a member of MSD colloquium committee at Argonne National Laboratory from 2011..