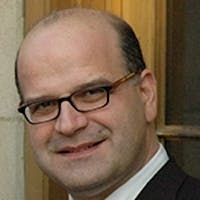 Professor Aggelos Katsaggelos joined the faculty at Northwestern University in 1985, where he is now the Joseph Cummings Professor in the Department of Electrical Engineering and Computer Science. He is also the Director of the Motorola Center for Seamless Communications, a member of the Academic Affiliate Staff, NorthShore University Health System, an affiliated faculty at the Department of Linguistics at NU, and he has an appointment at the Argonne National Laboratory. He received the Diploma degree in electrical and mechanical engineering from the Aristotelian University of Thessaloniki, Thessaloniki, Greece, in 1979, and the M.S. and Ph.D. degrees in electrical engineering from the Georgia Institute of Technology, Atlanta, in 1981 and 1985, respectively. His current research interests include multimedia signal processing (e.g., image and video recovery and compression, audio-visual speech and speaker recognition, indexing and retrieval), multimedia communications, computer vision, pattern recognition, and machine learning. He has published extensively (5 books, 210 journal papers, 500 conference papers, 45 book chapters, 25 patents). So far 70 M.S. and 46 Ph.D. students have graduated under his supervision. He is a Fellow of IEEE and SPIE and his awards include the IEEE Third Millennium Medal, the IEEE Signal Processing Society Meritorious Service Award, the IEEE Signal Processing Society Technical Achievement Award, and a number of paper awards. He was the Editor-in-Chief of the IEEE Signal Processing Magazine for six years. He was a Distinguished Lecturer of the IEEE Signal Processing Society and has also given a number of keynote talks and short courses at scientific conferences, as well as in industry and academia. He has been teaching courses on multimedia signal processing for the last 30 years. His research results have been implemented in commercial products and video compression standards.