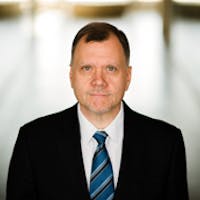 Rob A. Rutenbar is an Adjunct Professor of Computer Science at the University of Illinois at Urbana-Champaign. He received his PhD from the University of Michigan in 1984, and spent the next 25 years on the faculty at Carnegie Mellon University. He joined Illinois in 2010 as the Head of the Computer Science Department. He has worked on design tools for integrated circuits for the last 30 years, in areas ranging from synthesis, to optimization, to formal verification, simulation, and geometric layout. On a leave of absence from CMU in 1998, he cofounded Neolinear Inc. to commercialize the first successful tools for analog circuit design; he served as Neolinear’s Chief Scientist until its acquisition by Cadence (NASDAQ: CDNS) in 2004. His research spans both chip design methods and custom silicon chip architectures. In 2017 he was appointed Senior Vice Chancellor for Research at the University of Pittsburgh, where he also holds faculty appointments in both Computer Science and Electrical and Computer Engineering. Prof. Rutenbar has won many awards for his work. He is a Fellow of the IEEE and the ACM. He received the 2001 Semiconductor Research Corporation Aristotle Award in recognition of the impact of his teaching and his students on the US semiconductor industry. He received the 2007 IEEE CAS Industrial Pioneer Award for his contributions to making circuit synthesis tools a commercial success. Most recently, he won the 2013 IEEE Transactions on Computer-Aided Design Donald O. Pederson Best Paper Award for work predicting nanoscale chip variations using techniques from machine learning and Bayesian statistics.